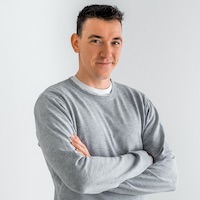 My name is Miha Novak (it’s a male name, I kid you not), and I’m a 26-year-old Software Engineer based in Slovenia, Europe.

I’ve been programming professionally since my 20th birthday.

In the last year I have been working on a startup with a friend, developing a home-based arm exercising tool for post-stroke patients, called HomeClinico, but upon a failed attempt have now dipped my toes into Frontend Development in Turtl. Previous 6 years I was working in Ad Technology space witnessing world class trends in Mobile Advertisement sphere.

The number 1024 next to my name comes from a codename that my University entitled me with and I was so fond of it, I decided to use it everywhere, so it kind of became my signature.

My passion is tackling interesting problems the company is facing and helping to grow their revenue streams. I love building solutions that have a direct impact on revenue, since it’s the most important metric for every company to have.

Since you don’t get much opportunity to impact revenue streams directly, I strive to help out optimising the performance of programs through architectural and asynchronous principles.

I’d consider myself a generalist as I like to get my hands dirty on all fronts. Being a generalist also lets me interconnect the best practices of every field.

Currently I only have one serious project in my arsenal; HomeClinico. It is a startup/side-project that’s solving a problem of COVID-19 and the lack of physiotherapists. HomeClinico is a home-based arm exercising tool for post-stroke patients and elderly with daily guided exercises. The project however didn’t make it out as we have hoped and we were forced to put it on life support.

I like to tinker around different programming challenges and try to prototype my ideas. To name a few:

and for everything I’ve received from the community, I wanted to give a little back, thus the idea for Programmer’s guide Slovenia was born (and well appreciated too). Since there were several requests from people without Facebook accounts, I did a Bookmarklet for Facebook post extracting, but due to Privacy concerns, it wasn’t used.

As I had a rising interest in startups, I also read all of Paul Graham’s essays on startups and gathered notes of each essay on one place.

I also like to read all sorts of books which can be seen on my “list” HERE.

I have a notebook just for book notes and for every book listed on the upper GitHub link, I have at least 4 pages of notes. Some books forced me to make 16 A4 pages of notes.

I really do fell lucky and proud, at the same time, to have worked alongside such talented people for these amazingly successful companies:

Back in 2015 I started my Android Engineer journey at Infinum and I accumulated a hefty amount of Android development knowledge. I worked on Android projects for clients alongside Infinum’s artists, project leads, developers and clients.

During my 6 year working experience in Outfit7, I’ve been responsible for technical Android side of Mobile advertisement, and I’ve developed a great interest towards it to such extent that I’ve decided to write a whole blog about it.

I became exposed to advanced topics of Digital Advertising Technology which include:

In Outfit7 I built my own Android projects from ground up with initial technical specifications included and even orchestrated some of the project cross-platform (backend, iOS) members. A few of my responsibilities:

Thanks to my great mentors and managers Nevena Veljković, Marko Pistotnik and Matic Standeker, I’ve advanced both mentally and professionally! Thanks for all the great advices and help, I really do appreciate it!

After a failed attempt at my own startup, I wanted to learn new things, so I jumped into Frontend development. I started with React but later on switched to Angular, since I foresaw enough challenges within Turtl’s content creation program written in Angular and joined their team.

I’m part of the Frontend team, but since the whole technical department is not as big, I also write small chunks for the backend (NodeJS, Express) as well.

Being an Android Engineer for the past 7 years, I wanted to see what else is out there. I decided to check out other types of Mobile development (Flutter, iOS, React Native) in my free time, to see the tradeoffs of each and interconnect the concepts. I wanted to transition into Web so I started studying React and ended up doing Angular on a job.